A cleaner Baltic Sea – this was the initial idea behind the waste water disposal project for this millions-strong metropolis. Today, 19 Amarex KRT pumps ensure that up to 98 percent of the city’s waste water is treated in a waste water treatment plant before being discharged into the Baltic Sea.

The project: A waste water pumping station for St. Petersburg

The St. Petersburg waste water pumping station was planned as the centrepiece of a twelve kilometre-long tunnel system designed to transport millions of litres of waste water to a waste water treatment plant.

The challenge: A complete solution for pumping waste water from a great depth

On a technical level: the construction of a waste water pumping station in a shaft structure capable of lifting the waste water of a metropolis of millions from a depth of 92 metres so that it could flow to the waste water treatment plant via a tunnel system.

And in terms of logistics, the customer decided to opt for a solution “from a single source”. As well as supplying the submersible motor pumps, drives and frequency inverters, KSB thus had to also provide all downstream services including supervision for the waste water disposal project. Hydraulic planning and engineering services including sophisticated physical model testing were also part of the comprehensive package provided by KSB.

The solution: Waste water pumps for the most stringent requirements

A total of 19 robust pumps from the tried-and-tested Amarex KRT waste water range including control systems and frequency inverters are now in use for waste water disposal in St. Petersburg. KSB individually tailored the waste water pumps’ hydraulic systems to the special requirements of the pumping station. The pumps driven by dry-installed submersible motors with a power rating of 700 kW each transfer the waste water from a depth of 92 metres into a tunnel system – from here it flows by gravity into the waste water treatment plant.

With this waste water treatment project, KSB has made a substantial contribution to ensuring that today up to 98 percent of the waste water generated by the St. Petersburg’s millions of inhabitants can be fully treated.

The waste water project was developed on the basis of close cooperation between Russia and Finland. The Finnish state was involved from the outset and played a key role in the project’s funding. Furthermore, KSB used Finnish expertise for the control systems. The waste water pumping station was completed and handed over in 2013, the International Year of Water Cooperation. The aim of this special year was to raise awareness of the challenges of the water industry and the rising demand for water as a valuable resource. The operators of the plant also wanted to encourage people to become more conscious about how they use water. 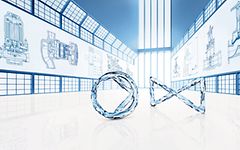