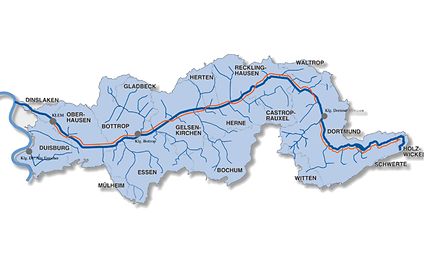 The the Emscher canal, is the key construction project in converting from an open to a closed waste water discharge system in the framework of the renaturalisation activities for the river Emscher. © by Emschergenossenschaft

Emschergenossenschaft was founded in 1899 as the first German water management association. The organisation is responsible for wastewater treatment, securing the water drainage, flood protection and water maintenance in the Emscher River Basin (Ruhr district, Germany).

The cooperative today comprises 200 municipal and corporate members and, with more than 1,500 employees, manages a catchment area of 865 km2, which contains five large sewage treatment plants, 128 pump stations and 341 km of watercourses and sewers.

Pumps before their connection to the waste water pipes in Gelsenkirchen

Following many decades of neglect, by the end of the 20th century, the Emscher was considered to be the dirtiest river in Europe. With the end of coal mining in the region, the Emscher is now undergoing a programme of infrastructure restoration and environmental clean-up. The central component of the €4.5 billion project is the 51 km long Emscher sewer. Emschergenossenschaft is building new wastewater pumping stations in Bottrop and Gelsenkirchen (later also in Oberhausen) for what is currently the largest wastewater project in Europe.

To sum up the Emscher Conversion project in simple terms, it is a massive 51 km underground wastewater tunnel, connected to a network of underground conduits and pumping stations that will move all the wastewater currently flowing into and along the open drain. With the demolition of the open sewer systems, the River Emscher and its tributaries will revert back to natural water courses.

The challenge: The most energy-efficient wastewater treatment technology

In order to keep the wastewater flowing along the entire 51 km, the tunnel has to have a downward slope of 1.5 m per kilometre. With such an incline, the tunnel would be 75 m below ground level when it reaches Dinslaken.

View of the approx. 40 metres deep construction pit of the pumping station in Gelsenkirchen

The solution to this challenge was to build three large pumping stations at Gelsenkirchen, Bottrop and Oberhausen in order to raise the water from a depth of around 40 m to 8 m below ground level. These pumping stations are essential to the successful operation of the entire system, which is why exacting specifications were set out at the start. These could be satisfied by using pumps with particularly efficient hydraulic properties to provide reliability and to keep energy consumption and operating costs as low as possible.

KSB was able to secure the contract, seeing off competition from various other providers, by recommending its Sewatec pumps. These pumps have well-proven wastewater hydraulics and achieve excellent efficiencies for an excellent price/performance ratio.

KSB’s principal areas of involvement were the provision of pumps for the Bottrop and Gelsenkirchen pumping stations. Both pumping stations lift the wastewater from the valley to the sewer sections at a higher level. The biggest pump sets each have a drive rating of 470 kW and handle up to 6,480 cubic metres of wastewater per hour.

For the pumping station in Bottrop, Schachtbau Nordhausen GmbH, constructors of the pumping stations, commissioned 10 Sewatec pumps with discharge nozzles between 500 and 700 mm and impeller diameters of up to 900 mm with universal joint shafts. Nine pumps of the same design were commissioned for the Gelsenkirchen pumping station. In addition, two Sewatec pumps were supplied in the same size in a close coupled design.
Several modifications were made to the pumps to meet the project’s special requirements. The casings for this variant were designed with tangential discharge nozzles by KSB engineers to achieve even better efficiencies. The impellers were also optimised to provide excellent efficiency, while at the same time ensuring a high degree of operational safety.

Due to the extreme demands placed by the operator on shaft sealing, a new mechanical seal was developed and built. This newly developed tandem mechanical seal with integrated quench container is mounted as a cartridge seal, which makes its assembly and disassembly very easy and requires no external connections.

The efficiencies of the pumps were bench-tested at the KSB factory in Halle/Saale through the CFD (computational fluid dynamics) simulation. Each pump was tested individually prior to dispatch and showed that the commitments made for efficiencies were not only met, but even exceeded by up to 3%.

Manfred Greisch, KSB project manager sums it up very simply: “The Sewatec pump is designed to meet the challenging requirements of the nature of the water in the Emscher system. It is resistant to chemical attack and abrasives. But most significantly, KSB pumps have particularly efficient hydraulics compared to their competitors. And it almost goes without saying that KSB has the infrastructure and resources to support these pumps throughout their working lives.”