Industries Are Turning To Large Blade Mixers To Conserve Energy

To appreciate the importance of mixing, it helps to consider the array of products that require mixing as they are made or refined. Stirring with a stick may seem crude, but for an application like cooking, it is still a state-of-the-art mixing technology. As increasing volumes of material need mixing, larger and more automated mixing technologies are required.

From a simple blender to large truck-mounted concrete mixers, mixing has evolved rapidly. In particular, with changing environmental regulations and legislation, new products are constantly being created to supply energy-efficient mixing for water and wastewater applications.Throughout this evolution, submersible mixers have maintained market stability and have proven reliable in varied applications.

The first submersible mixers were manufactured in the early 1960s and were quickly implemented in wastewater treatment. They were soon used in the original step-feed nitrification/denitrification activated sludge process, introduced in the late 1970s.

This mixing technology has been used ever since because it is highly effective and offers a simple means of mixing for all of the aerobic, anoxic, and anaerobic reactors required by the biological treatment process. With increasing energy costs in Europe in the 1980s, highly efficient large-blade/slow-speed mixers came to the market, and by the mid-1990s they became the European standard for mixing activated sludge processes. The technology was slow to catch on in the United States, where energy costs were lower. However, it is becoming much more prevalent here with constantly rising energy prices and growing sustainability awareness over the last 10 years. 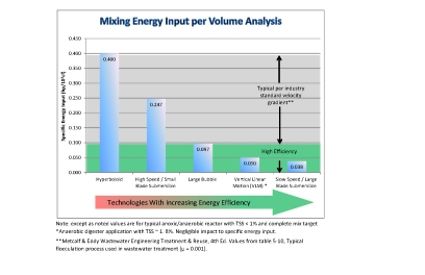 In the water and wastewater industry, the original preferred mixing technology was small-blade/high-speed mixers. These submersible mixers use a direct-drive motor to produce turbulent flows at submergence typically about 10 feet. The technology is used for tasks such as thickening, nitrification and denitrification stages, biological phosphorus elimination, and stormwater basin solids suspension.

With an output range from 20 to 40 hp at speeds up to 1,750 rpm (depending on the manufacturer) small-blade mixers have many benefits and have proven highly reliable over the last half of the century. Multiple shaft seals enable long operating life by providing extra safety against leakage. One manufacturer even offers as standard, three levels of up-front shaft sealing, including a lip seal and two totally independent mechanical seals.

Leading manufacturers also use a backward-swept self-cleaning propeller design, hydraulically optimized for reliable mixing with the lowest possible energy costs. In addition, these mixers have a robust shaft with sealed-for-life bearings for high reliability at low maintenance and service costs.

Along with these other features, some manufacturers have perfected the power and control cable by fully sealing its cross section and offering a simple plug-and-play connection that further improves reliability and ease of installation. All these benefits help make small-blade mixers a popular choice for engineers and operators when selecting agitation technology. 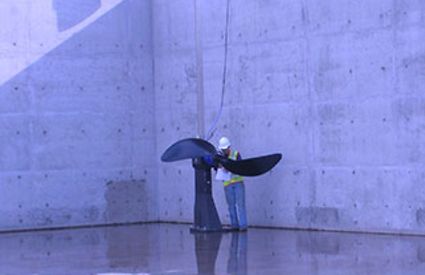 A large-blade Amaprop mixer installation from KSB is shown in an anoxic reactor at the City of Grand Island Wastewater Treatment Plant.

As energy costs rise and treatment processes become increasingly intensive to meet U.S. EPA and state regulations, mixing technology has rapidly evolved. A U.S. EPA report, Evaluation of Energy Conservation Measures (ECMs) for Wastewater Treatment Facilities, touches on some newer technologies being developed to meet those demands. However, because the report focuses on emerging ECM technologies, it does not remind Americans of the large-blade submersible mixers that have been the European standard for more than two decades.

On average, a large-blade submersible mixer provides the same mixing results as a small-blade mixer while requiring only one-fourth the power. For example, computational fluid dynamics (CFD) shows almost identical mixing from an 8-foot-diameter (large-blade) propeller turning at 30 rpm and a 2-foot-diameter propeller (small-blade) turning at 600 rpm.

The evolution from small-blade to large-blade agitators has occurred as a way to provide higher-efficiency mixing. With typical speeds up to 100 rpm and power output of less than 10 hp, large blade mixers deliver substantial power savings, while including all the long-life and low-maintenance benefits of small-blade mixers.

In order to analyze efficiency, the energy requirements of the mixing equipment must be standardized on a per volume basis (in accordance with the industry standard VDMA 24656). The resulting Mixing Energy Input per Volume Analysis can then be utilized to compare operational costs because it is directly correlated to energy bills (see accompanying chart).This analysis reveals that the large-blade mixer efficiency compares favorably in studies with other mixing technologies, including hyperboloids, large-bubblesystems, and vertical linear motion equipment.

Due to the high strength of the wastewater, the food facility was incurring high treatment surcharges from the city, and the city had proposed significant capital upgrades at the municipal plant to address ammonia loading. As a remedy, the company designed and built its own biological pretreatment system, which included two aeration and two anoxic reactors.

Because of the energy costs associated with the new facility, the company decided to solicit bids for various mixing technologies to help achieve the most efficient solution. After examining the technical details, the company chose large-blade submersible mixers.

While providing equivalent mixing results, the large-blade mixers supplied large energy savings over small-blade and jet mixing alternatives the company considered. The plant installed 12 large-blade mixers requiring a combined 36 hp, saving more than 200 hp over the small-blade mixer array that would have been needed to accomplish the same mixing.

Since startup in September 2011, the large-blade mixers have performed to expectations. JSB USA environmental director Mark Retsema stated, “The low-energy mixing system was exactly what we were seeking, as it provides both effective mixing and high oxygen-transfer efficiency at minimal energy demand.”

While new mixing energy conservation measures continue to be developed, submersible mixing technology will continue to evolve while building on the credibility it has maintained since the 1960s.

About the author Jared Wray, P.E., is product manager of submerged propeller devices at KSB, Inc., a pump and mixer manufacturer based in Richmond, Va. He can bereached at jwray@ksbusa.com.