Nowhere else is water more precious than in the desert – a fact which is known only too well by the nomadic Tuareg people, who live in the Sahara and the Sahel region. To provide them with support in this arid area, pump and valve manufacturer KSB has committed itself for three years to the project “Les Puits du desert” (in English: Wells of the Desert) run by the French aid organisation of the same name.

KSB is providing a total of 45,000 euros via its French subsidiary in Paris for the construction of wells in Niger. Tapping new water sources will help Tuareg settlers to irrigate their fruit and vegetable fields at the edge of the city of Agadez. The water from these wells will also be used to supply a girls’ school and a hospital. Under the programme, up to 400 additional wells will be created in the desert along the walking routes of the nomadic Tuareg.

“Les Puits du desert” was founded by the French woman Christel Pernet in the year 2000. Four years later, the organisation joined forces with the association “Tidène” founded by Mohamed Ixa, who himself is a member of the Tuareg community.

KSB is a leading international manufacturer of pumps, valves and related systems for use in a wide range of applications. The Group employs around 15.000 people and has a presence on all five continents, with its own sales and marketing companies, manufacturing facilities and service operations. KSB supports a range of aid projects, in particular projects that help children and young people. 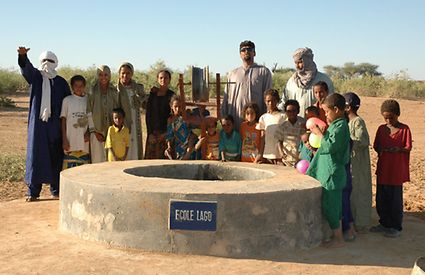