KSB, Inc. uses cookies to be able to optimally design and continually improve its web site. By continuing to browse the web site you consent to the use of cookies.

U.S. Municipal Wastewater: Where are we headed?

The water and wastewater treatment equipment market is growing at a CAGR of 7.4%, with huge growth expected at the end of this decade.

Municipal wastewater reuse will increase by 61% by 2025, requiring $11 billion of capital, according to a 2015 report by Bluefield Research. With more than 247 reuse projects currently in various stages of planning in the U.S., this is a key market trend. Despite being enormously expensive and using significant energy resources, desalination will also continue to be a part of the water treatment conversation with roughly $21.4 billion spent on this technology in 2015—an investment that is expected to reach $48.2 billion by 2020.

Rapid growth for the water treatment equipment market is driven by growth in global water demand. Water shortages are experienced in many regions of the world and will be a major global issue by 2025. This is due to:

Disinfection, filtration, and desalination are expected to grow in Asia-Pacific. Australia, China, and India with high investments in the desalination process. 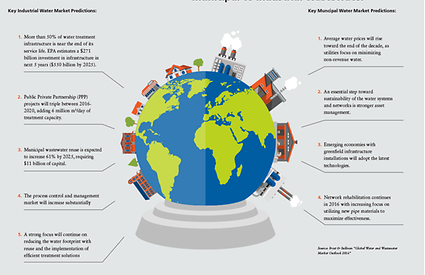 Use of Wipes and Disposables

As consumers seek convenience and cleanliness in a quick-and-easy “disposable society,” more people are using wipes today than ever before. Flushable and personal care wipes have seen consistent growth worldwide over the past decade with no signs of a slowdown.

More than 50% of U.S. Muni water/wastewater infrastructure is nearing the end of its useful life.

$550 billion to be invested between 2016 and 2025 for capital improvements to replace deteriorating pipes, sewer overflows, etc.