The hardness of water is defined as the presence of ions of alkaline earth metals dissolved in the water and their anionic partners. The degree of hardness is determined by the pH value and is given as the concentration of calcium (Ca2+) and magnesium ions (Mg2+), and - in some special cases (e. g. seawater) - of strontium and barium ions. Since these ions form insoluble, unwanted compounds (lime, lime soaps), the water hardness must be taken into account during planning.

There is a correlation between hardness expressed in the legal unit mmol/l, and the former nationally and internationally used degrees of hardness.
See Fig. 1 Water hardness 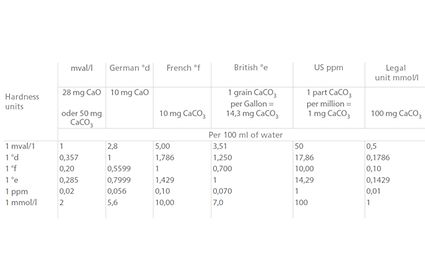 Water hardness is also relevant to the formation of an anti-corrosive, chalky rust film and the proneness to scale deposition. This formation of deposits is prevented in service and cooling water supplies by softening (e. g. removing the substances causing hardness), adding polyphosphates, or using complexing agents.