The term “valve” stems from the Latin “valva”, which means "moving part of a door". In piping technology, a valve is a piping component which controls, directs or mixes the fluid flow by opening, closing, diverting or partially obstructing the passage through itself. Valves are classified according to their basic design type (globe, gate, butterfly, ball or plug and diaphragm valves) and according to the functions they perform, i.e. valves for shut-off and safety (e. g. safety valves, bursting disc safety device), control valves (e. g. control equipment, condensate trap, balancing, distributing and mixing valves) and check or non-return valves. It is also possible to differentiate valves by application, i. e. power station, heating, gas and food-grade valves. Depending on the type of actuation, a differentiation is made between manually operated valves, electrically, pneumatically and hydraulically actuated valves and valves actuated by the fluid handled.

Globe valves are mainly used as shut-off and control valves. They are classified into subgroups according to their body type (straight-way pattern, angle pattern, conventional or Y-valve design ), the type of seat/disc interface (soft-seated and metal-seated) and the type of stem passage (e. g. bellows, gland packing, elastomers). 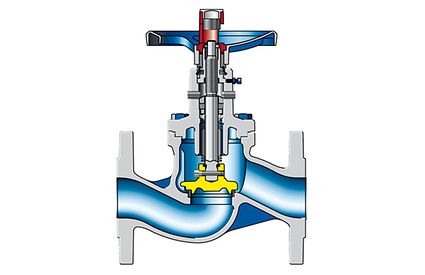 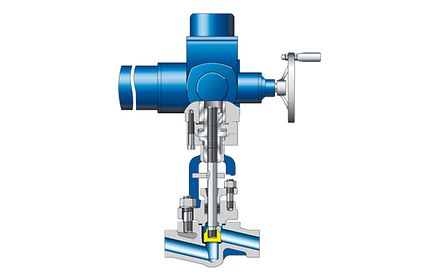 In valves with large nominal diameters and high pressures, the forces acting upon the stem are considerable; they can be kept within reasonable limits by using valves with a pilot plug (i.e. for internal pressure equalisation). However, this is only possible if a back pressure can build up in the
adjoining piping system (see Obturator). 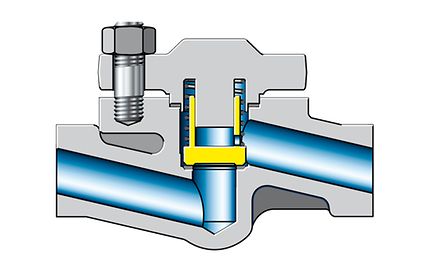 By fitting a lift check valve (foot valve) in a suction line, it is possible to prevent the suction line from emptying after the pump has been stopped. This means that the pump does not have to be re-filled prior to a re-start.

A special lift check valve design is the automatic recirculation valve. It is usually fitted on the discharge side of boiler feed pumps and designed to maintain a minimum flow during low flow operation. During low flow operation, the pump's efficiency is lower and most of the energy consumed
is converted into heat which may result in the partial evaporation of the water volume trapped in the pump. The low water volume and the resultant insufficient water lubrication can lead to damage due to metal-to-metal contact, e. g. at the balance disc (see Axial thrust). The automatic recirculation or minimum flow valve plug moves downwards when the pump's flow rate decreases, opening a bypass in the process through which a defined minimum flow is bypassed back into the inlet tank. The latter helps to dissipate heat, thus preventing evaporation. See Fig. 5 Valve 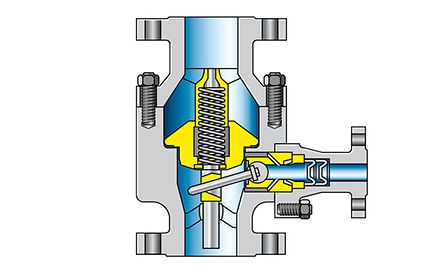 Other special types of check or non-return valves are ball check valves, safety valves and relief valves. In the case of the last two valve types, a spring- or weight-loaded plug opens when a given overpressure has been reached, and relieves the system. The so-called combined non-return/shut-off valve combines both shut-off and check valve functions.

This type of valve is characterised by low pressure losses because of the straight-line flow path. Gate valves can be built for very large nominal diameters and pressure classes and fluid flow can pass in both directions. The long travel of gate valves make them larger than other valve types.
Gate valves are used as shut-off valves. In order to be used as control valves, gate valves must be specifically designed for this purpose.

Wedge gate valves have either a single solid or a single flexible wedge, or a double disc wedge. They have the following advantages in comparison with parallel slide gate valves: The wedge shape increases sealing forces, resulting in effective sealing even at low pressure differentials. The swift withdrawal of the wedge from its seat helps to avoid a sliding motion and undesirable side effects such as scratches on the seat as a result of foreign particles or seizure. See Figs. 6, 7 Valve 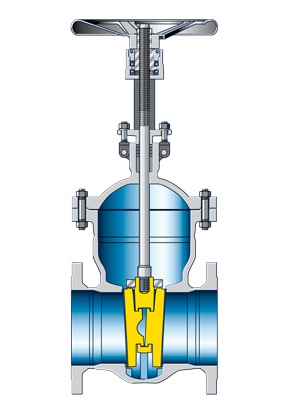 Slide gate valves include through-conduit-type gate valves and variants with one disc or parallel discs. In order to ensure that parallel slide gate valves provide satisfactory sealing at low operating pressures, it is necessary to include springs (e. g. in the form of elastomers or metal springs) to press the discs against their seats. As a result of the sliding action of the sealing surfaces against one another, a certain self-cleaning effect is achieved.

Soft-seated slide gate valves with one disc are usually called single disc or knife gate valves. They are primarily employed in industry, process engineering and in the waste water sector, with their use being limited by application temperatures. See Fig. 8 Valve 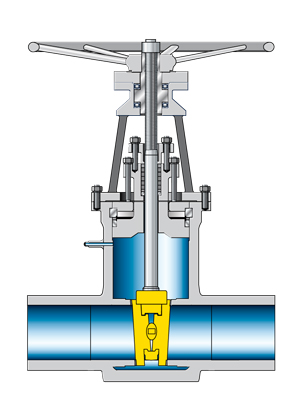 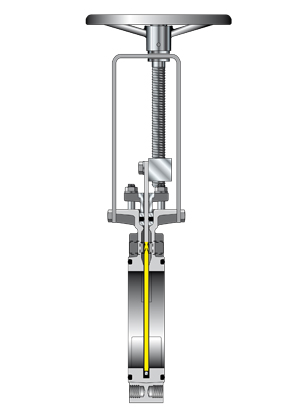 The ball or plug valve is probably the oldest form of shut-off device in piping technology. Bronze or lead ball and plug valves were used by the ancient Romans as early as in the centuries B.C. These valves are mainly used as shut-off valves. Specifically designed variants can be employed as control valves.

As the obturator used in ball and plug valves is rotated within the flow chamber, the overall height is usually low and the maximum actuating distance or travel is small (one quarter turn) If there is no transmission, the position of the actuating lever indicates the position of the valve itself.

Like gate valves, ball and plug valves are characterised by low flow losses. Classification of these valves is performed according to the shape of their obturator or closing element (spherical, conical, cylindrical) and according to their body design (one-piece body, single- or multiple-split body).

Valves with a spherical obturator and cylindrical flow passage are termed ball valves. A frequently used design is the two-piece ball valve which is primarily employed in general industry, in the chemical, petrochemical, pharmaceutical, process engineering, food and paper industries and in power plants.

The obturator (plug, ball) frequently has a floating design. Some ball and plug valve variants are trunnion-mounted and are employed in high differential pressure applications. The seat gaskets are mostly made of a plastic material (e. g. PTFE), but some valves also have metal-to-metal variants. See Fig. 9 Valve 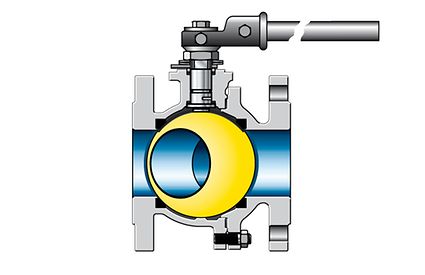 Butterfly valves are mainly used as shut-off or control valves. They are characterised by their simple design and overall small size. The face-to-face length of butterfly valves with wafer-type design is the shortest of all valve types. As with ball and plug valves, the maximum actuating distance or travel is usually a quarter turn, which makes position indication straight forward.

The flow resistance coefficient of butterfly valves is relatively low, however slightly higher than that of ball and plug valves. They are mainly used in applications where medium-sized to very large nominal diameters are required.

Butterfly valves are differentiated according to the disc's position or the orientation of the sealing surface relative to the axis of rotation. They are classified into centred-disc, offset, double-offset and triple-offset designs. See Fig. 10 Valve 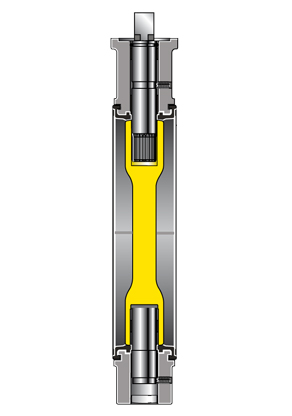 Most centred-disc butterfly valves are soft-seated; their bodies are either lined with or fitted with a liner made from elastomer or plastomer and a metal valve disc. They are suitable for use with many fluids and have a very large range of applications, e. g. in general industry and in energy, heating and air-conditioning, and drinking water systems.

The seat ring of double- and triple-offset butterfly valves is often made of metal or plastomer. This allows their use in higher pressure and temperature ranges and in cryogenic applications, industry (e. g. chemical, sugar and paper industries), geothermal applications, power plants and shipbuilding. The double- and triple-offset design eliminates almost all friction occurring as the disc makes contact with the seat. See Fig. 11 Valve 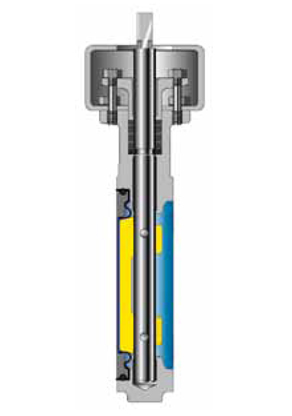 Swing check valves usually can only be dampened by externally fitted devices (which is problematic in the case of pulsating flow). Dual-disc swing check valves are mostly installed in heating and air-conditioning systems and in water supply and treatment installations. See Fig. 12 Valve 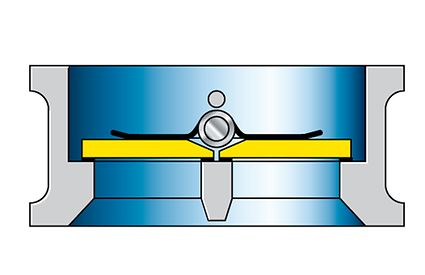 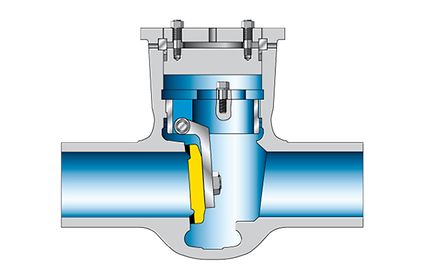 Diaphragm valves are predominantly used as shut-off valves. Their diaphragms are predominantly made from a (flexible, deformable) elastomer material which is not part of the pressure-retaining body and separates the moving parts from the fluid. They are extremely flexible and allow the valve to be closed before backflow propagates towards the valve. This prevents the valve from slamming shut and helps to mitigate pressure surges. Water supply is the main field of application for diaphragm valves.

Weir-type diaphragm valves are characterised by the fact that the flow passage is closed by pressing the diaphragm onto a raised weir integrated into the body. They can be used in a wide range of applications including general industry, the food and luxury food industry, the chemical industry, process engineering, building services and systems for drinking and service water. See Fig. 14 Valve 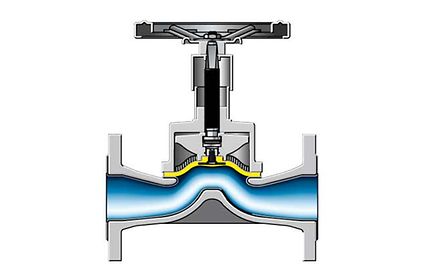 Straight-through diaphragm valves have a similar design. Closing is achieved by pressing the diaphragm onto the body wall; the body is shaped such that a largely free flow passage is provided.

In the case of pinch valves, the flow passage's cross-section, which usually consists of a hose-shaped elastomer component enclosed by the valve body, is manipulated via manual, pneumatic or hydraulic "pinching" motion. The closing element of diaphragm check valves resembles a hollow, conically shaped elastomer diaphragm. See Fig. 15 Valve 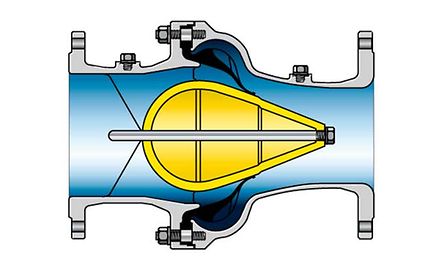 In a wider sense, strainers also belong to the group of valves. The purpose of a strainer is to separate solid particles from the fluid handled. Metal gauze is generally used as filter material; magnetic filters are employed for ferrous fluids.

The suction strainer (inlet strainer) at the inlet of a centrifugal pump'ssuction line is a special type of strainer. The suction strainer is perforated with slots and round holes, with a total hole area several times larger than the pipe's cross-section area (see Pressure loss).