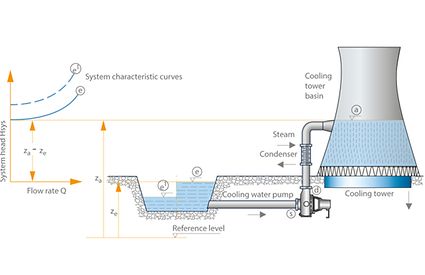 Fig. 1 System characteristic curve: Diagram of a cooling tower system and system curves at variable water levels in the river

The intersection of the pump-specific H/Q curve with the system-specific curve Hsys/Q determines the operating point. See Fig. 1 Operating point

The shape and position of the system characteristic curve result from the equation used to determine the system head (Hsys):

e,s   Relate to the system's suction side, i.e. to the portion between the cross-sections e and s
See Head Fig. 2

d,a  Relate to the system's discharge side, between the cross-sections d and a

The expression (va2 – ve2)/(2 ∙ g) is a negligible quantity if the system's cross-sections in e and a are of adequate size or of approximately the same size.

In practice, this expression is seldom of any significance. The expressions (pa – pe)/(ρ ∙ g) and (za – ze) are independent of the pump's flow rate (Q).

Therefore, the relationship between the system head (Hsys) and the flow rate (Q) is evidenced mainly in the head losses (HL) which can be calculated by means of the following equation:

As the flow velocity (v) is the quotient of the flow rate (Q) and the cross-sectional area (A), and assuming a constant loss coefficient (ζ) and sufficiently high Reynolds numbers (see Model laws), we have: HL ~ Q2.

The reason for the system curve's parabola shape becomes clear. For the vertex of the system characteristic curve at Q = 0, we have:

From the above equation it follows that the system characteristic curve shifts vertically in the H/Qsys coordinate system if the system's tank pressures (pa, pe) and the geodetic head Hgeo = za – ze vary. Hsys,0 is often referred to as Hstat in the scholarly literature.