Starting torque is the torque transferred by the shaft coupling during run-up (see Start-up process). It is calculated based on the ratio of power (P) to angular velocity (ω) and is represented as a rotational speed function. 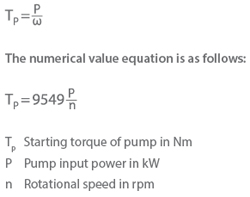 All starting torque curves (Tp) begin with the breakaway torque (TPL) to overcome bearing and seal static friction. They reflect the increase in torque along with rising rotational speed (n) and the increase in power input (P) as a function of increasing flow rate (Q). These processes occur either at the same time or in succession.

In contrast to centrifugal pumps with low specific speeds, a different starting torque curve develops at high specific speeds (e. g. propeller pumps) due to the increasing flow rate and decreasing power input (characteristic curve). More starting torque is therefore required for starting against a closed gate valve (points I and II would be located above line A-B) than for starting against empty, unpressurised piping (point III would be located below the operating point (B)). This characteristic must be observed.