For DOL starting, the three motor winding connections are wired in delta configuration from the outset. This means that the full mains voltage is immediately applied to the stopped motor, i.e. the entire starting torque is available right from the beginning. The operating speed will be reached within a very short period of time.

This starting method is the most favourable one for the motor, even if the starting current increases to 8 times that of the nominal current. Since this can place a demanding load on the power supply mains when larger motors are involved and cause voltage dips for adjacent devices, it is important to observe the provisions issued by the energy supply companies for DOL starting of motors with ratings above 5.5 kW in public low-voltage mains (400 V). 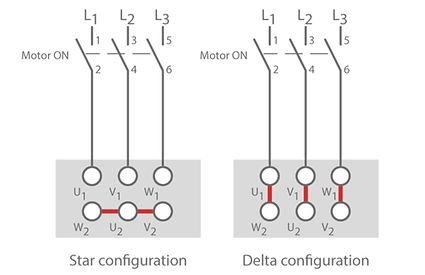 Fig. 1 Starting method: Motor terminal board of a three-phase asynchronous motor: matching the supply voltage by selecting the configuration via jumpers

Star-delta starting is used to drive machines with a high moment of inertia and limit the starting current of an asynchronous motor connected in delta configuration.
For star-delta starting, the armature winding is initially connected to the power supply mains in a star configuration, and the motor is brought up to speed in this configuration. At switchover, delta current is theoretically all that is required and corresponds to the current rotational speed.

The result is a reduction in starting current of 1/3 as compared with delta DOL starting. The same relation applies to torque. See Figs. 2, 4 Starting method 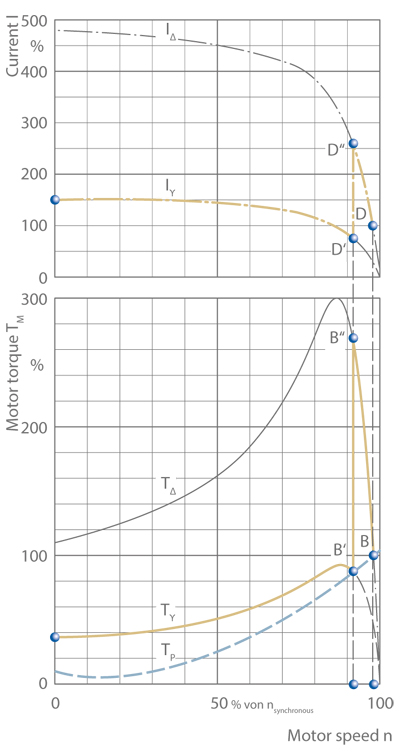 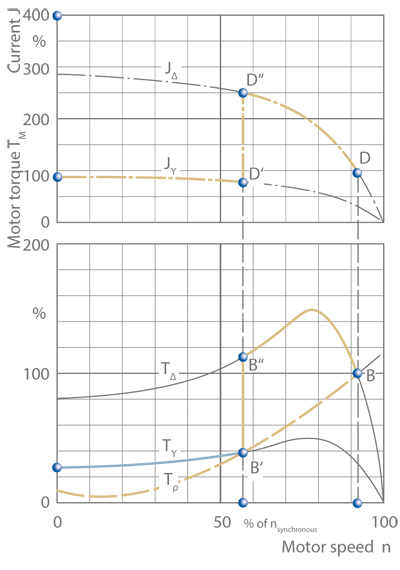 Fig. 4 Starting method: Starting curve for current I and torque T for canned motors (designations as in Fig. 1)

Star-delta starting can only be used for three-phase motors whose winding connections are not connected internally, but are routed separately outwards. The delta connection may only be established after the machine has run up to speed in order for the targeted reduction in starting or inrush current to be realised. The torque produced with the star configuration must be sufficient to accelerate the driven machine to about its nominal speed. Switching from star to delta can be effected manually or automatically.

In practice, the star-delta configuration comprises a contactor circuit that allows the motor winding connections to be switched between the external conductors and the star point. Both switching states are interlocked in operation. Automatic switchover is possible if additional control relays are used. See Fig. 3 Starting method 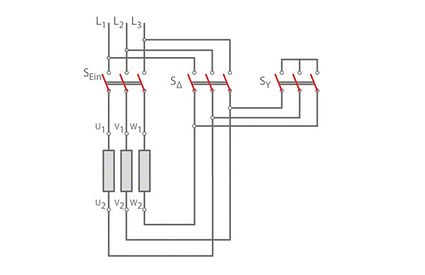 Switching the configuration from star to delta will cause current and torque peaks, which increase the mechanical load placed on coupled components. Very smooth starting and stopping can only be achieved via electronic solutions such as a soft starter or frequency inverter.

An auto transformer typically finds application in high-powered motors to ease starting. To this end, it reduces the voltage (and thus the starting current) supplied to electric asynchronous motors. The transformation ratio of the transformer further reduces this current by the square of the reduction. Auto transformers are the most frequently used type of starting transformer for cost reasons.