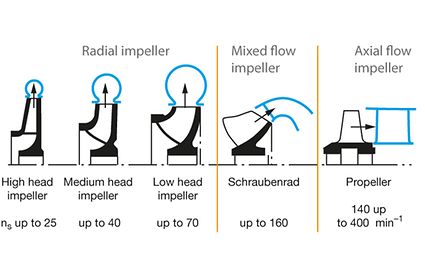 Defined as the theoretical rotational speed at which a geometrically similar impeller would run if it were of such a size as to produce 1 m of head (Hopt) at a flow rate (Qopt m3/s at the best efficiency point, the specific speed is expressed in the same units as the rotational speed:

A dimensionless characteristic coefficient in accordance with DIN 24260 can be established using the following equation:

The following relationship exists between the numerical values of the dimensional and dimensionless coefficients: 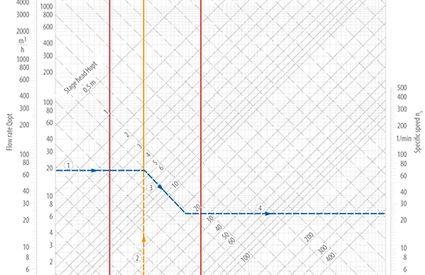 Diffuser elements on radial casings such as volute casings are also required to become larger and larger with increasing specific speed as long as the flow can be guided through the impeller in a radial direction. Eventually (i. e. at high specific speeds) the flow can only exit axially, e.g. via tubular casings.

The specific speed's numerical value is also needed to select the influencing factors required for the conversion of pump characteristic curves, for example, if fluids of higher viscosity or solids-laden fluids are pumped).

In Anglo-Saxon countries the specific speed is called "type number K" in accordance with EN 12723 and ISO 9906. In the USA it is referred to as Ns (pump specific speed), with the flow rate being specified in gallons/min, the head in foot and the rotational speed in rpm. The conversion factors are: