The characteristics of series operation are easier to understand than those for parallel operation and are not complicated by unstable H/Q curves or varying shut-off heads. See Fig. 1 Series operation 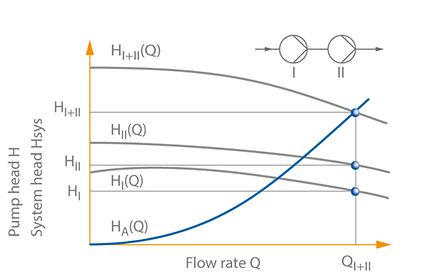 When several centrifugal pumps are operated in series, the pump casings and shaft seals of the next pump in series need to be sufficiently sized to withstand the higher pressure. The pump with the best suction characteristics should be placed in the lead position.

When starting up (see Start-up process) the lead pump must generate enough pressure to eliminate the risk of cavitation before the next pump can be started up. When shutting down, no pump on a lower pressure level may be stopped as long as the next pump in series is still running, otherwise the flow will run through the non-driven pump as through a rotating throttle which will drive the available NPSHa (net positive suction head) for the next pump in series down to an unacceptable level. It is sometimes necessary to interlock the drives.

After changing a pump system from single-pump to series operation, not only the head but also the flow rate in each of the pumps connected in series is enlarged. When selecting the pumps, it is therefore necessary to ensure that the NPSHr (net positive suction head required by the pump) is sufficient.

If the above mentioned conditions are observed and it can be ensured that the non-driven pump is either not rotated by the fluid flow or bypassed during its standstill, then series operation is suitable for economic, stepwise control of centrifugal pumps.

If stepwise start-up and stopping of the pumps as described above is not required, it is easier and less expensive to use multistage pumps in which the impellers and diffusers are arranged in a common pump casing instead of using several centrifugal pumps in series operation (see Multistage pump).