A seawater desalination system is a facility for producing drinking water or service water from seawater.

Seawater desalination has been gaining increasingly in importance in recent years. There are a number of processes that can convert the feed water pumped from the sea into desalinated water which can be used as drinking water, for example, after suitable treatment. Because of the high amount of energy required, seawater desalination is only worthwhile in places where fresh water is in short supply, for example on islands or ships.

Seawater desalination processes of technical and practical importance include the RO (reverse osmosis) process and the MSF distillation process.

MSF stands for multi-stage-flash, a process in which the feed water extracted from the sea gradually gradually warms up as it passes through the condenser coils (heat exchangers) of each individual stage. See Fig. 1 Seawater desalination system 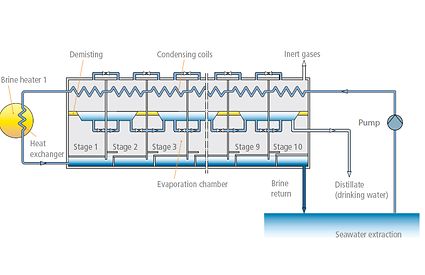 After leaving stage 1, the temperature of the feed water is increased still further in the brine heater, as a further heat exchanger. This brine heater may receive its heat energy from the waste steam of the process plant connected to the seawater desalination system or of the power station (e. g. a coal-fired power station).

The brine, which is now at a high temperature, then flows through the evaporation chambers of stages 1 to 10, releasing vapour. The vapour rises through the demisting device of each stage and condenses on the condenser coils. The condensed water (distillate) is collected in the tanks situated beneath the coils and is fed away for further treatment after the final stage.

The pressure is further decreased from one stage to the next, whereby the temperature of the brine decreases and the salt concentration increases.

If the pressure on the side of the higher concentration is increased to a value above that of the osmotic pressure, the process will occur in the reverse direction (reverse osmosis). High-purity water with only a very low salt content will penetrate through the membrane from the high concentration salt solution.

This water (permeate) can be used as drinking water, whilst a concentrated salt solution is left on the high-pressure side of the membrane. See Fig. 2 Seawater desalination system

Modern seawater desalination systems operate according to the reverse osmosis principle, in which pressure higher than the naturally occurring osmotic pressure is applied to push salt water through a membrane that is permeable only to the water molecules. This is done by channelling seawater under pressure past the membrane, whereby a proportion of the water passes through the membrane and the remaining seawater (brine) is concentrated. The proportion of the water diffused through the membrane is approximately 40 % of the seawater used. The remaining 60 % of concentrated brine is discharged as reject stream.

The pressure drop across the osmotic membrane is independent of the ratio of the salt concentrations on the two sides of the membrane. If this pressure is 65 bar, this results in irrecoverable energy loss (W) of 1.76kWh/m3 of desalinated water. However, most of the energy contained in the brine can be recovered.

Taking all efficiency losses of the RO system into account, energy input of at least 2.5 to 5kW/m3 must be expected. The actual energy input is therefore dependent both on the quality of the recovery of the energy contained in the discharged seawater, and on the efficiency of the pumps and systems used for pressure generation and for auxiliary processes.

The basic structure of an RO system is the same for all system types, the main difference being the type of energy recovery.

One option for energy recovery is to release the brine pressure via a turbine and return the shaft power of the turbine to the pump shaft. See Fig. 3 Seawater desalination system 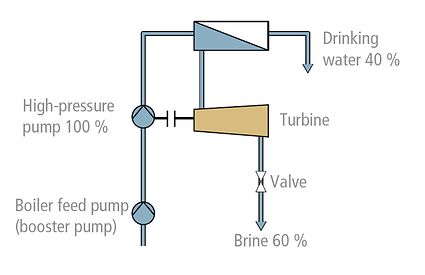 The most energy-efficient option for energy recovery is to use a pressure exchanger, in which the pressure of the brine is transferred directly to the feed water do be desalinated. See Fig. 4 Seawater desalination system

All systems are equipped with different pumps depending on their design. These pumps must all be built using stainless materials because of the salt water to be handled. This also applies for valves.

Energy recovery is often dispensed with in small installations because of the high system cost. In this case the pressure is reduced, mainly unused, via a throttle valve. 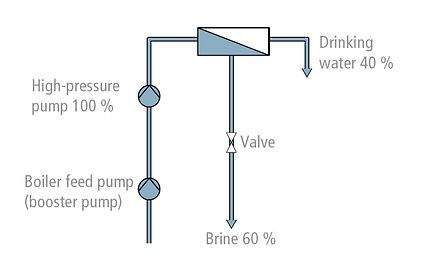 Larger installations usually have several pumps. For example, the salt water for the plant is transferred from a reservoir using a booster pump, which may be a borehole pump or other type for a different extraction method.
The salt water is pumped through a filter to remove solid substances and suspended particles. A high-pressure pump installed downstream of the filter generates the osmotic pressure for the osmotic membrane.

Plants with a pressure exchanger also require a circulating pump, which is used for overcoming inner losses in the membrane, valves and the pressure exchanger. It is also a single-stage centrifugal pump with a head of approx. 30 m, which must be designed for the system pressure of the feed pump. The feed pump is always a multistage centrifugal pump, which is designed with few stages in accordance with its head of approx. 650 m.