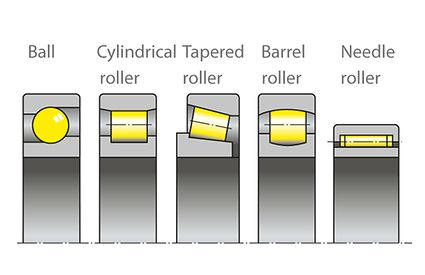 In addition, they are frequently equipped with a cage which prevents contact between adjoining rolling elements. See Fig. 2 Rolling element bearing 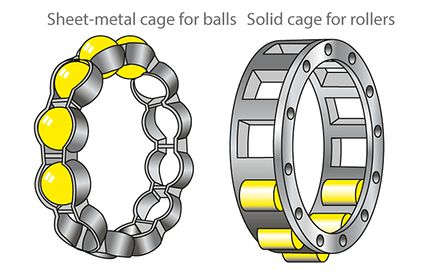 Depending on the direction of force, a distinction is made between transverse (radial) bearings, axial (thrust) bearings and designs such as radial deep groove ball bearings which can handle both radial and axial forces. See Fig. 3 Rolling element bearing 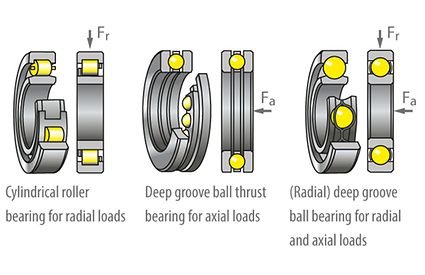 In radial bearings, the rolling elements run between races or rings (ring bearing), and in axial or thrust bearings they run between discs (disc bearing). 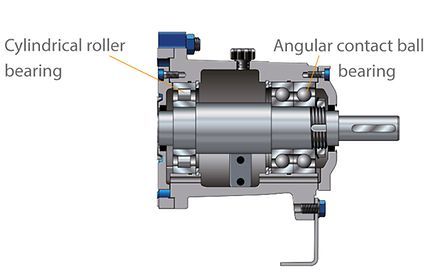 As the rolling velocity increases, so do the centrifugal forces acting on the rolling elements. The bearing's operating temperature increases as a result of higher friction losses; this means that each standard bearing has an upper rotational speed limit. This limit speed can easily be calculated as a function of the bearing type, size, type of lubrication and load; the equations to be used are supplied by bearing manufacturers in their catalogues.

A complete separation of the contact faces by a load-bearing lubricant film does not take place due to the rolling contact motion of the rolling elements. Conventional lubrication with greases or oils of an appropriate consistency is adequate.

The bearing manufacturer usually provides lubrication recommendations which detail the influence of the bearing's operating temperature and the ageing stability of the recommended greases and oils under the prevailing operating conditions, and usually give directions regarding topping up the lubricant fill.

The trend is towards for-life lubrication, meaning that the initial lubricant fill lasts for the bearing's entire service life.