Radial thrust in centrifugal pump engineering is a hydraulic radial force in the plane of the impeller, generated by the interaction between the impeller and the pump casing or the diffuser.

The steady hydraulic radial force (R) in volute casing pumps is generated by the interaction between the impeller and the casing. Its vector changes its magnitude and direction with the Q/Qopt ratio (q), i.e. the quotient between the flow rate (Q) and the flow rate at best efficiency point (Qopt).
The magnitude increases with the density (ρ), the projected impeller outlet area (B · D) and the head (H), where q is constant, and the direction (φ) remains unchanged. See Fig. 1 Radial thrust 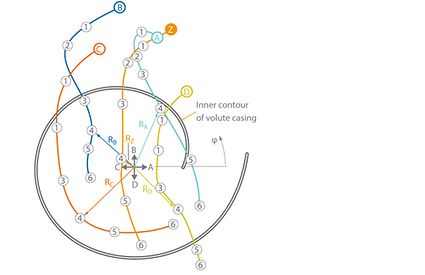 Radial thrust is defined as:

However, if the impeller is positioned eccentrically in the base circle of the volute, notable de-centring forces also occur at the design point while the radial forces may be smaller at other duty points. Fig. 1 Radial thrust shows an example of a volute casing pump with a specific speed of ns = 26 rpm and its force vector curves, where radial force vectors for six different Q/Qopt ratios (q) radiate from the centre (incl. the connecting lines between end points). It also shows the vectors for one centred and four eccentric impeller positions in the pump casing (the direction of point A points to the volute's tongue).

Vectors RA, B, C, D for the best efficiency points (at q = = 1) are included on all five force vector curves as an example. At BEP the centred rotor position (curve Z) results in the smallest radial forces. The force minimum of the remaining force vector curves for eccentric impeller positions is larger and also lies outside of the best efficiency point. 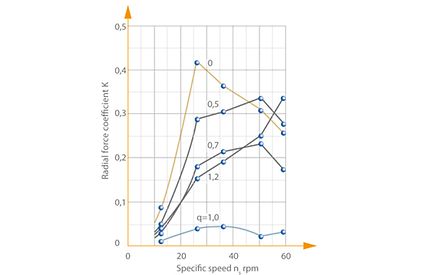 Fig. 2 Radial thrust: Magnitude of the radial force coefficient K for a volute casing pump as a function of the specific speed ns and the Q/Qopt ratio q

The forces acting on impellers fitted in annular casings are lowest in the low-flow range and continually rise towards the overload range. Double volute casings are frequently used (see Pump casing) in order to reduce the forces. See Fig. 6 Volute casing pump

Unsteady and in some cases rotating radial forces may be superimposed onto the steady radial forces. They may have different causes and characteristics. The best-known are the unsteady hydraulic radial forces with a frequency = number of impeller vanes x rotational speed. These radial forces appear to a greater or lesser extent in all types of pumps.

In particular in diffuser-type pumps (see Diffuser), rotating hydraulic radial forces develop under low flow conditions and when the rotor is in centred position (rotating frequency approx. 1/10th of the pump speed).