Electrical power measurement is a method of measuring the power in a circuit, which is expressed in watts. In centrifugal pump applications, electrical power is measured using electrical and mechanical-electrical methods.

Measurement of electrical power for:

These measurement functions can often be combined in a single (electronic) measuring instrument with an easy-to-read display. This dual watt-meter method can always be applied, even for an inaccessible neutral conductor, phase imbalance, or fluctuating power. If the neutral conductor is accessible (motor with star configuration) and the phases are balanced, a single power value (Peff1) can be measured to determine the total electrical power using the formula Peff = 3 ∙ Peff1.
See Fig. 2 Power measurement. 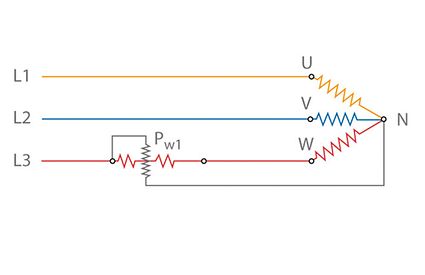 The efficiency of the motor (ηM), and possibly of the gearing, must be known to determine the power output.
To rule out uncertainties in motor and gear efficiency for frequency-controlled drives in particular, a torque and speed-measuring instrument is installed in the drive train before the pump, especially during testing in a test bay.

Instruments for measuring the power input of a pump during testing in a test bay: 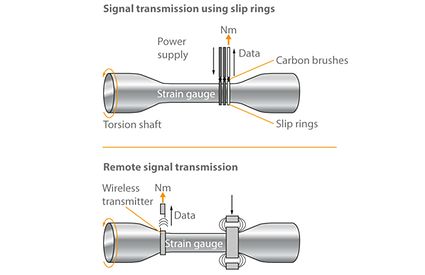 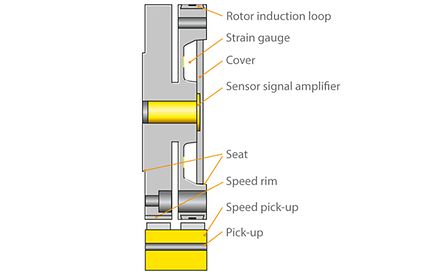 These instruments are installed between the motor and pump or between the gear and pump as part of the coupling or as a separate instrument. Rotational speed is generally also supported and measured.

Different systems, the majority of which are electronic, are available for transferring the signals. The main challenge with this technology is to reliably transfer the measuring signal from the rotating to the stationary system and to supply power to the measuring elements. Initially, slip rings were used for this purpose. However, they are very susceptible to malfunctions, which is why they have been replaced with contact-free transmission devices in precision systems. The latter transmit and display the measuring signals in the form of amplitude or frequency modulations, depending on the system.