ISO 7268 or EN 1333 defines PN as an alpha-numeric designation which is used for reference purposes and relates the mechanical and dimensional properties of a piping system component.

The letters PN are followed by a dimensionless number (e. g. PN16). The figure followed by the letters PN does not represent a directly measurable value and should not be used in calculations unless this has been specified in the relevant standards.

Components with the same PN (e. g. flanges) and the same DN have identical mating dimensions. Other designations such as class are also common but should only be used in combination with the specification NPS (Nominal Pipe Size).

The standardised nominal pressure classes defined in the obsolete DIN 2401 have not been included in the EN 1333 standard. See Fig. 1 PN

Regardless of these provisions, the nominal pressure classes specified in the obsolete DIN 2401 are still applied and are therefore listed for information.
See Fig. 2 PN 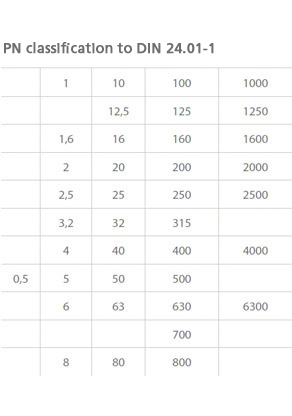