Multistage pumps are defined as pumps in which the fluid flows through several impellers fitted in series.

The head of a single-stage centrifugal pump is largely governed by the type of impeller and the circumferential speed. If the rotational speed cannot be increased due to other operating conditions and a larger impeller diameter would lead to very low specific speeds resulting in uneconomical efficiencies, fitting several stages in series (also see Series operation) can be an economic option of increasing the head. If the number of stages is altered at unchanged dimensions and speeds, the flow rate of such a multistage pump remains constant while the power input and head increase proportionally to the number of stages.

An example of a pump with several stage casings of the same type fitted in tandem arrangement is the ring-section pump. This type of pump is often used in power station applications, e.g. as a boiler feed pump and in industrial applications requiring high pressures.

The individual stages of a multistage pump do not necessarily have to be arranged in tandem.  The balancing of axial thrust can be enhanced by arranging the stages back to back in pairs or groups (see Back-to-back impeller pump). A typical example would be the pipeline pump.

Multistage pumps are an economic means of covering the higher pressure ranges of pump series selection charts. Further advantages are that multistage pumps can easily be tapped downstream of a stage or that dummy stages can be fitted for future pressure increases.

A disadvantage of very large numbers of stages is the increasing sensitivity of the pump rotor to external or natural vibrations.

Each stage consists of an impeller, a diffuser and return guide vanes (usually combined with the diffuser), which are all located within one and the same stage casing.

Irrespective of the number of stages an inlet casing with radial or axial inlet nozzle is arranged upstream of the first stage, and the last stage is fitted in the discharge casing containing the balancing device and a shaft seal. Only the common pump shaft, tie bolts and baseplate have to be adjusted to accommodate the required number of stages. See Fig. 1 Multistage pump 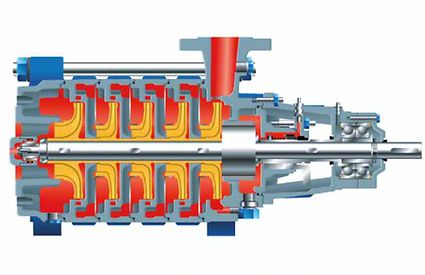