Kinematic viscosity (ν) designates the quotient of the dynamic viscosity of the fluid handled and its density. The SI unit is m2/s (see also Viscosity).

However, most measurements are still made in centistokes, e.g. in the UBBELOHDEviscometer. The unit used here is m2/s and is called – in honour of the Irish physicist STOKES – a Stokes (St). The hundredth part thereof is a Centistokes (cSt). The Stokes unit ceased to be officially valid in 1978.

The conventional units of viscosity are unsuitable as a basis for calculation, but are still used in commerce. These are: degrees Engler (ºE) in Germany, Saybolt seconds (S˝) in USA and Redwood seconds (R˝) in Britain.

To ensure correct usage, the Stokes units and the units still currently in general use must be converted into the SI unit m2/s. See Fig. 1 Kinematic viscosity 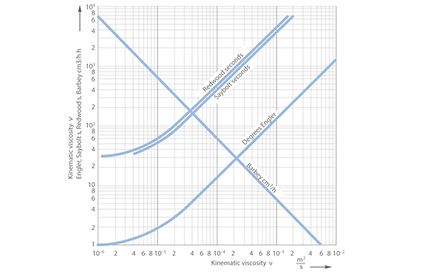 The former units are no longer approved and can be converted to m²/s using Fig. 1 Kinematic viscocity. (See also Viscosity).

The table can also alternatively be used to assign corresponding values to one another. If values higher than 1000 cSt are required, the data given from 60 cSt can be multiplied accordingly by 10, 100, 1000 etc. The conversion of conventional measures into cSt is inaccurate, particularly within the 1 to 9.5 cSt range (see DIN 1342, viscosity of NEWTONian liquids).