Head losses are a result of wall friction in all types of pipelines and of local resistance to flow, for example in valves and fittings (see also Pressure loss).

Head loss in a pipe

The equation for the head loss of a flow in a straight length of piping with circular cross-section is:

The pipe friction factor was established experimentally. It is only dependent on the state of flow of the fluid handled and of the relative roughness (d/k) of the pipes through which the fluid is flowing. For non-circular pipe cross-sections the equivalent diameter in fluid-mechanical terms (d) applies:

The state of flow is determined by the Reynolds number (Re) according to the affinity laws. The following applies to circular pipes:

If flow is turbulent, or the Reynolds number higher than 2320, the pipe friction factor in hydraulically smooth pipes can be represented by an empirical equation according to Eck (due to the fact that deviations are below 1 % if the Reynolds number is lower than 108).

The pipe friction factor (λ) also depends on a further dimensionless parameter, i.e. on the relative roughness of the pipe's inner surface (d/k). Both must be specified in the same unit (e. g. mm).

(k) is the mean absolute roughness of the pipe inner surface for which approximate values are available depending on the material and manufacturing processes. See Fig. 2 Head loss 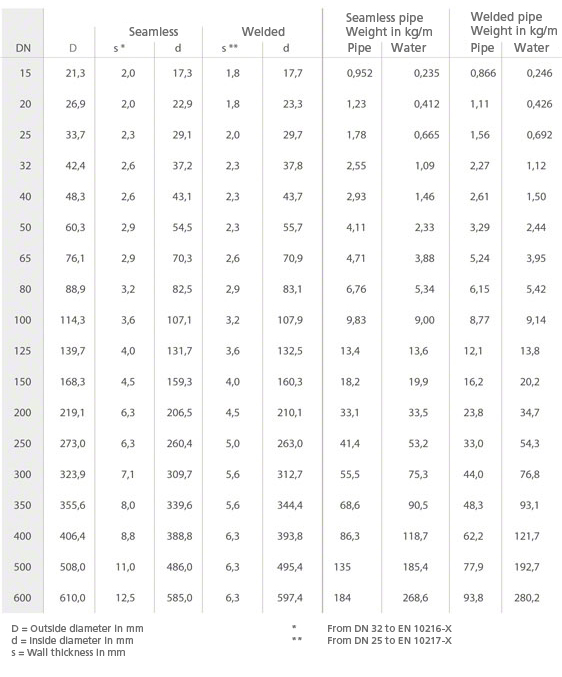 The following empirical equation by Moody can be used for this region:

For practical use, the head loss (HL) per 100 m of straight steel pipe is shown in the diagram as a function of the flow rate (Q) and pipe inside diameter (d).
See Fig. 3 Head loss

The values are valid only for cold, clean water or for fluids with the same kinematic viscosity, for completely filled pipes and for absolute roughness of the pipe inner surface of k = 0.05 mm.
Dimensions, weights, water fill for new seamless or longitudinally welded steel pipes
See Annex, Head loss, Fig. 4

The effect of an increased surface roughness k will be demonstrated in the following for a frequently used set of parameter ranges (nominal diameter DN = 50 to 300, flow velocity v = 0.8 to 3.0 m/s). See Fig. 3 Head loss
The light blue region corresponds to the similarly marked region for an absolute mean roughness of k = 0.05 mm.
See Fig. 1 Head loss

For a roughness increased by a factor of 6 (slightly incrusted old steel pipe with k = 0.30 = 300 μm (0.30 mm), the pipe friction factors (and the associated proportional head losses) in the dark blue region are only 25 - 60 % higher than before.
See Fig. 1 Head loss

For sewage pipes the increased roughness caused by soiling must be taken into consideration. For pipes subject to extreme incrustation, the actual head loss can only be determined experimentally. Deviations from the nominal diameter change the head loss considerably, as the pipe inside diameter features in the equation to the 5th power.

A 5 % reduction of the inside diameter, for example, leads to an increase in head loss by as much as 30 %.  It is therefore important that the internal diameter is not simply replaced with the nominal diameter in the calculations.

The head losses in plastic pipes or smooth drawn metal piping are very low thanks to the smooth pipe surfaces. The head losses established are valid for water at 10 °C. At other temperatures, the loss for plastic pipes must be multiplied by a specified temperature correction factor to account for their larger thermal expansion. For sewage or other untreated water, an additional 20-30 % head loss should be taken into account for potential deposits.

Head losses in valves and fittings

The head loss (HL) in valves and fittings is given by:

ζ   Loss coefficient
See Figs. 6 to 12 Head loss
v   Flow velocity in a characteristic cross-sectional area A
(e. g. at the nozzle) in m/s
g  Acceleration due to gravity 9.81 m/s2 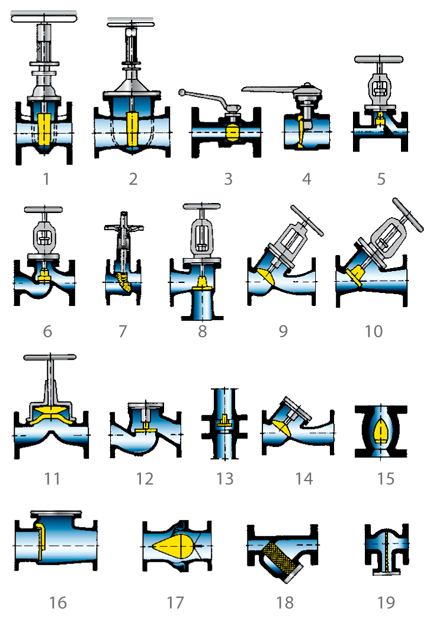 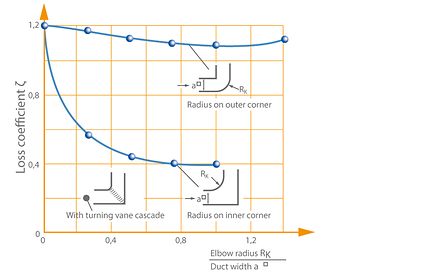 Fig. 11 Head loss: Influence on the loss coefficient ζ of rounding off the inner and outer side of elbows in square ducts 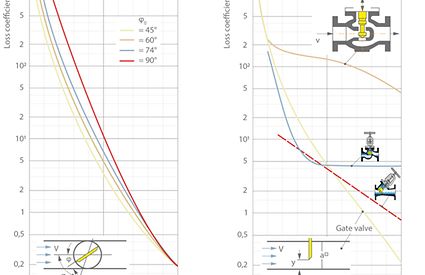 Fig. 12 Head loss: Loss coefficients ζ for butterfly, globe and gate valves depending on the degree of opening

The losses attributable to the straightening of the flow disturbances over a pipe length equivalent to 12 x DN downstream of the valve are included in the loss coefficients in accordance with the VDI/VDE 2173 guideline. The values apply to valves which have a steady approach flow, are fully opened and operated with cold water. Depending on the inlet and outlet flow conditions, the valve models and development objectives (i. e. inexpensive or energy-saving valves), the loss values can vary dramatically. See Annex, Head loss, Fig. 7

Often the kv value is used instead of the loss coefficient (ζ) when calculating the pressure loss for water in valves:

The kv value is the flow rate in m3/h which would result from a pressure drop pv = 1 bar through the valve for cold water. It describes the correlation between the pressure loss (pL) in bar and the flow rate (Q) in m3/h. Conversion to flow coefficient ζ for cold water:

d   Reference (nominal) diameter of the valve in cm

For the calculation of head losses in fittings, branch fittings and adapters require a different approach. See Figs. 9 and 10 Head loss 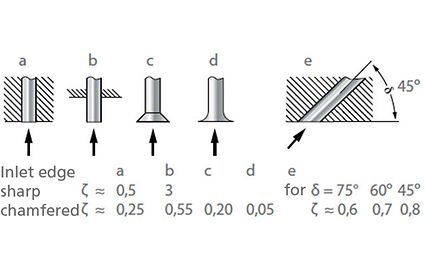 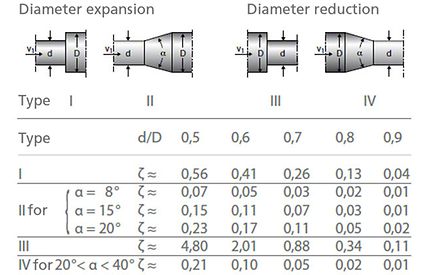 For all fittings a differentiation must be made between two forms of pressure loss:

Influence of highly viscous fluids on the system characteristic curve

As the laws of fluid dynamics retain their validity for all Newtonian fluids, the equations and diagrams for calculating the pipe friction factors and loss coefficients for valves are also applicable to viscous fluids with a higher viscosity than water.

When calculating the Reynolds number Re = v · d / ν , one must simply substitute the kinematic viscosity of the viscous fluids νz for the water viscosity νz.

This yields a lower Re number and, according to Fig. 1 Head loss, a larger pipe friction coefficient λz (Note: the influence of the wall roughness can now often be ignored because of the larger boundary layer thickness in the flow).
All of the pressure losses in the pipes and valves calculated for water are to be extrapolated using the ratio λz/λw.

Figure 13 Head loss is also suitable for general practical use: the pipe friction factor λz can be determined quickly as a function of the flow rate Q, pipe inside diameter d and kinematic viscosity νz. It must be kept in mind, however, that the coefficient λw in this diagram is only valid for hydraulically smooth pipes (i.e. not for rough pipes)! The corresponding λw can be used to calculate the ratio λz/λw.

Influence of non-Newtonian fluids on the system characteristic curve

As the flow curves are not straight lines of constant linear viscosity, the calculation of the head losses is very cumbersome. In this case, loss calculation is based on experience with particular fluids.