Fluid mechanics is the science of liquid and gaseous media in motion (see Fluid). Within the context of hydrodynamics and partially aerodynamics, it investigates fluid flows which exhibit negligible changes in density (incompressible fluids) and, in the field of gas dynamics, gases where compressibility must be taken into account.

Fluid mechanics attempts on the one hand to set up and solve equations describing flow phenomena in theoretical terms, and on the other to present and interpret in a suitable form empirically established principles and relationships regarding certain fluid flow problems.

Depending on the number of coordinates required, a distinction can be drawn between one-, two- and three-dimensional flow phenomena which can be either steady (i.e. independent of time; see Steady flow) or transient (i.e. dependent on time; see Transient flow).

One fundamental equation in fluid mechanics is the continuity equation in differential form:

Furthermore, according to the Bernoulli equation the total pressure (ptot), i.e. the sum of the static pressure (p), dynamic pressure ((ρ / 2) · v2) and elevation term (ρ · g · z), along a filament of flow in a frictionless flow is constant.

The extension of this equation to flows of viscous fluids between two arbitrarily selected cross-sections (A x , A y) of a pump system requires the head losses and pressure changes caused by a pump or a turbine between A x and A y to be taken into account:

If real two- and three-dimensional flows travel outside the boundary layer at a sufficient distance from solid walls and can therefore be considered as quasi-frictionless, they can generally be calculated by applying potential flow methods.

However, finding exact solutions for incompressible flows of viscous fluids by applying the equations of motion (Navier-Stokes equations) is only possible in a few simple cases.

For a homogeneous Newtonian fluid (ρ, η = const.) this results in: 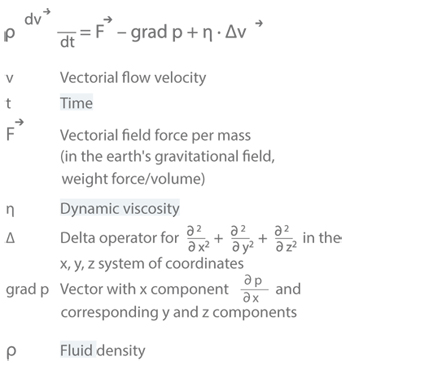 Given sufficiently high Reynolds numbers, the general equations of motion for the thin boundary layers present in proximity to solid walls can be greatly simplified and solved by the various methods of the boundary layer theory.
Based on the flow's microstructure, a distinction is made between laminar and turbulent flow.

In the case of incompressible frictionless flow, the general equation of motion is simplified to the so-called Euler equation from which the Bernoulli equation is derived for steady flow.

In centrifugal pump engineering, the principle of conservation of momentum or theorem of momentum plays an important role for incompressible steady flows. It represents the integral form of the Navier-Stokes equations. An example of application is the so-called Carnot shock loss in an incompressible flow through a diffuser with an abrupt increase of cross-section. See Fig. 1 Fluid mechanics

The diffuser has circular cross-sections. At the abrupt transition from the smaller cross-section (A1 = π · D12/ 4) to the larger cross-section (A2 = π · D22/ 4), a ring-shaped flow separation (a) develops as a result of the inertia of the flowing mass (wake or dead water). The flow only reattaches to the wall after a travel path (L) equal to at least 8 to 10 times the diameter D2.

The principle of conservation of momentum is to be applied to the outside forces acting in the direction of the flow velocity (v) on the fluid enclosed in the defined space (depicted in the illustration by the dash-dotted lines). The momentum forces (FJ) should constantly be directed toward the enclosed fluid.

Other forces involved are the pressure (Fp) and friction (Fv) forces.

The wake or dead water flow (see Boundary layer) at the pipe wall causes the friction forces (Fv) to be negligible. Therefore, according to the principle of conservation of momentum, the equilibrium of forces in the direction of the flow velocity (v) (positive direction) can be expressed as:

According to the principle of conservation of momentum, the difference in static pressure becomes:

According to the Bernoulli equation, the following applies to a filament of flow, taking into account the pressure loss (HL1,2):

If (p2 – p1) is now inserted as derived from the principle of conservation of momentum, the following applies with z1 = z2:

Because of the similarity between the above equation derived from the principle of conservation of momentum and the equation for the loss of energy in a straight-line inelastic impact of two bodies, the head loss obtained from the last-mentioned equation has been named Carnot shock loss in fluid mechanics.

A further important application of the principle of conservation of momentum leads to the so-called fundamental equation of turbomachinery: If an impeller's vanes (see Vane) are subdivided into impeller elements, where one element (subscript El) lies between two adjoining flow surfaces (see Flow line) of the relative flow in the impeller (see Relative velocity), the specific energy transmitted by the vanes of the impeller element (YEl) is:

The fundamental equation of turbomachinery applies to any type of impeller or runner in centrifugal pumps and turbines.

The equation is independent of the density of the fluid handled and can also be applied to applications where the fluid's density changes during its passage through the impeller, e.g. to gaseous fluids, steam and vapours.

Another method for expressing an impeller's specific energy is:

In this equation the first two terms can be interpreted as the difference in static pressure energy across the impeller. The energy difference resulting from the components of absolute velocity is only available as velocity energy and therefore must be converted into pressure energy in the diffuser elements or diffusers.

ṁ   Mass flow through the impeller

Following the addition of the power losses, the centrifugal pump's input power (P) is: