They serve to feed a steam generator such as a boiler or a nuclear reactor with a quantity of feed water corresponding to the quantity of steam emitted. Today, all boiler feed pumps are centrifugal pumps.

Until 1950, the average pressure in the outlet cross-section of the pump (discharge pressure of the feed pump) was in the 200 bar region. By 1955 the average discharge pressure had risen to 400 bar. The mass flow rates were in the region of 350 tonnes/h in 1950, compared to 3200 tonnes/h (in some exceptions up to 4000 tonnes/h) today. Boiler feed pumps operate at fluid temperatures of 160 to 210 ºC. In exceptional cases the temperature of the fluid handled may be higher still.

Feed pumps for 1600 MW nuclear power stations are constructed for mass flow rates of up to 4000 tonnes/h and feed pump discharge pressures of 70 to 100 bar.

Until 1950 approximately, boiler feed pumps were made of unalloyed steels; since then they have been made of steels with a chrome content of 13 - 14 %. This change of materials was made necessary by the introduction of new chemical feed water compositions. The development of highstrength, corrosion and erosion resistant martensitic chrome steels with good anti-seizure properties as well as the continuous development of all pump components (bearings, shaft seal, pump hydraulic system, etc.) paved the way for present-day boiler feed pumps with rotational speeds of 4500 to 6000 rpm.

The mass flow rates of centrifugal pumps rose rapidly in conjunction with the rise of unit outputs in power stations. Today's full load feed pumps for conventional 800 to 1100 MW power station units are constructed with four to six stages with stage pressures of up to 80 bar. Feed pumps for 1600 MW nuclear power stations are of the single-stage type.

In the case of conventional power stations above 500 MW full load feed pumps are increasingly driven by steam turbines. In most cases condensing turbines running at 5000 to 6000 rpm are used.

Electric motors usually drive part load feed pumps, both in fossil-fuelled and in nuclear power stations. Speed control of electrically driven feed pumps is effected by either fluid coupling (e. g. variable speed turbo couplings) or by electrical closed-loop control systems by means of thyristors (up to a drive rating of approximately 18 MW in 2011). 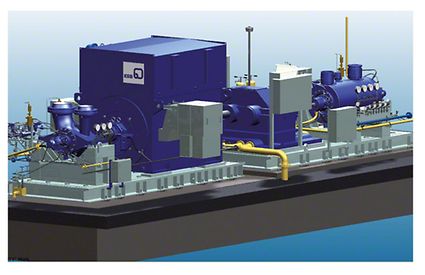 The low-speed booster pump is usually driven by the free shaft end of the turbine via a step-down gear or directly by the free end of the electric motor. See Fig. 2 Boiler feed pump 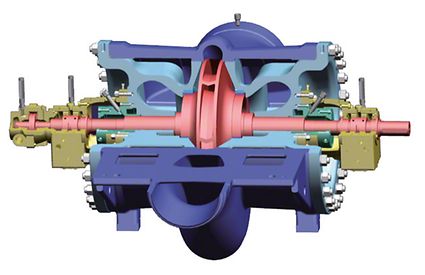 For conventional power stations boiler feed pumps are designed as: 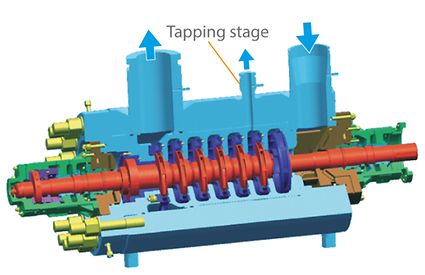 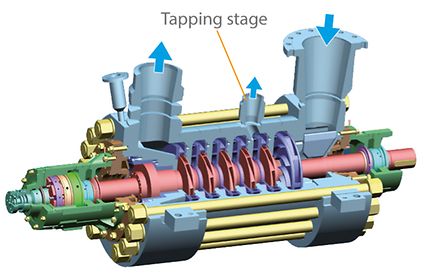 These two types only differ in the construction of their pressure-retaining enclosure, which influences the manufacturing costs and ease of installation. There are no differences with regard to operating reliability and robustness also in abnormal operating conditions. The dimensions of the rotating parts and flow passages can be designed identically.

Two aspects of deciding between a ring-section and a barrel pull-out pump are described below: 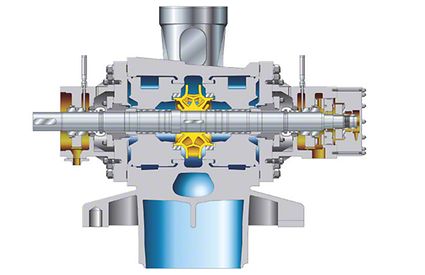 Cast pressure-retaining casing parts are increasingly replaced by forged parts. As an example, such a feed pump could be designed with a flow rate of about 4200 m3/h and a head of about 700 m at a rotational speed of 5300 rpm. See Fig. 5 Boiler feed pump

Heads of reactor feed pumps are in the region of 800 m for boiling water reactors and 600 m for pressurised water reactors. The flow rates are about twice as high as those of a comparable boiler feed pump in a fossil-fuelled power station.

For boiler feed pumps two factors have to be considered regarding the wall thickness of the casing: the pressure loads and the different temperature conditions it needs to withstand. These two criteria are satisfied by adopting a high-strength ferritic casing material which enables the wall thickness to be kept thin enough to avoid any overloads as a result of temperature fluctuations, yet of adequate thickness to guarantee the requisite safety against internal pressure. 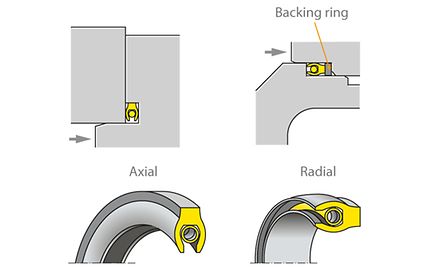 A common feature of barrel pull-out pumps and ring-section pumps is that the greater the wall thickness, the greater the thermal stress caused by thermal shocks, which in turn reduces the service life of the pump. The provision of injection water at a pressure situated between the suction and discharge pressure of the pump is a frequent requirement. This is taken care of by tapping water from one of the pump stages of both barrel pull-out pumps and ring-section pumps.

Tapping a stage of a boiler feed pump

The pump shaft of boiler feed pumps has a very small static deflection as the bearings are spaced as closely as possible, the shaft diameter is relatively large and the impellers are usually shrunk onto the shaft (for high performance). The pump shaft is generally insensitive to vibrations and runs smoothly (see Smooth running) without any radial contact during normal operation. The hub diameter at the back of the impeller is increased and the impeller inlet geometry is designed with a minimum diameter, so as to reduce the remaining axial forces (see Axial thrust) which have to be absorbed by the balancing device.

Some impeller arrangements of boiler feed pumps for conventional power stations cause axial thrust at the impellers. See Figs. 10 to 12 Axial thrust

The magnitude of this axial thrust depends on the position of the operating point on the characteristic curve, the rotational speed and the amount of wear on the internal clearances (see Controlled gap seal). Additional disturbing forces can arise in the event of abnormal operating conditions, e.g. cavitation.

Balancing of radial forces on the pump rotor

Radial forces arise from the weight of the rotor, mechanical unbalance or hydraulic radial thrust. The radial forces are balanced by two oil-lubricated radial bearings as well as by throttling clearances through which the fluid handled flows in axial direction. Such throttling clearances are located at the impeller neck on the impeller inlet side, or in the case of multistage boiler feed pumps for conventional power stations on the discharge side of the impeller (interstage bush) and at the balance drum. If the rotor is in an off-centre position, a re-centring reaction force will be generated in these clearances, which largely depends on the pressure difference and the clearance geometry (LOMAKIN effect).

The LOMAKIN effect is severely reduced when, due to abnormal operating conditions, the feed water in the clearance is not in a purely liquid phase (see Cavitation).

The hydrostatic action of the clearances contributes more to reducing shaft deflection than the mechanical stiffness does. The system is designed in such a way that operating speed always remains well away from the critical speed of the rotor, allowing hydraulic exciting forces (particularly in low flow operation) to be absorbed in addition.

Warming up and keeping warm

Transient or low flow operating conditions cause additional loads on boiler feed pumps. This leads to additional stresses and strains as well as to deformation of components with various consequences on their functionality.

Nowadays, almost all boiler feed pumps must be able to handle both cold starts (high-temperature shock loads) and semi-warm starts without any damage. In these start-up procedures hot feed water abruptly flows into the cold pump, which results in the inner components heating up much faster than the pressure boundary. Depending on the frequency of starts and the gradient curves of pressure and temperature (load cycles) this can shorten the service life of the pump.

On machines with particularly thick walls the heat will propagate more slowly in the thick-walled components, thus increasing internal stresses.

Contact between parts of the rotor and the stator cannot, generally, be ruled out as narrow clearances are used as controlled gap seals. This applies to the impeller neck on the impeller inlet side, the discharge-side clearance between impeller, diffuser and interstage bush as well as the balancing device with several throttling clearances (depending on the design).

Critical operating conditions such as the formation of vapour bubbles, for example, cannot be completely avoided in the inlet line. Brief contact between the stator and the rotor leads to high unbalance forces in the narrow clearances. For this reason the material pairs have to be resistant not only to corrosion and erosion but also especially to wear (incorporating good anti-seizure properties). Profiled chrome steels and a special clearance geometry have proven successful.

In operating conditions with a very low or zero flow, e.g. in the turning gear mode of a turbine-driven boiler feed pump, temperature layers establish in the fluid handled, which may cause deformation of the rotors and, after a slight delay, also of the non-rotating components. Once the clearance gaps are closed the rotor will be subjected to a significantly higher friction moment, leading to overload of the turning gear and to standstill of the pump. In this case, the temperature will no longer be equalised at the rotor, which will further aggravate the rotor deformation.

This can result in several hours of downtime for the pump. Usually the only remedy is to let the machine cool down to reduce or eliminate the critical temperature layers and the deformation.

Several actions can be taken to optimise the thermal behaviour of the pump:

Avoid large differences in temperature in and on the pump

The above measures are frequently used for barrel casing pumps (barrel pull-out pumps) as their outer dimensions, wall thickness, drive (turbine with turning gear) and operating modes are considered more critical than those of ring-section pumps. If possible, these measures are always automated to safeguard the availability of the pump set.

A minimum flow valve (automatic recirculation valve) ensures a minimum flow rate and thus prevents damage which could occur in low flow operation as a result of either an impermissible increase in temperature leading to vaporisation of the pump content or low flow cavitation.