Alternating current is internationally abbreviated as AC and describes the electrical current that periodically changes its direction (polarity), usually sinusoidally. This periodic change is expressed as frequency and indicates the number of changes in current direction per second. 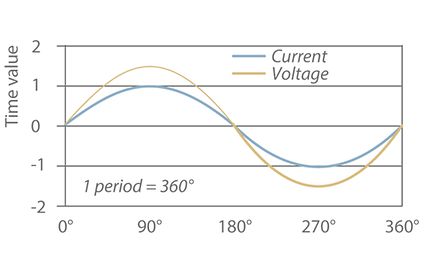 Normal AC mains supply is synonymous with single-phase alternating current and, in Germany and other European countries, corresponds to a frequency of 50 Hz and a voltage of 230 V. In North America and parts of Japan, however, mains frequencies of 60 Hz with voltages of 120 V (rounded from 117 V) are used.

They are evenly distributed around the periphery. These coils produce separate alternating voltages, each of which is staggered by a third of a period (equating to 120 degrees in a circular orbit) compared with other coil voltages. The individual phases of industrial alternating current can be used independently of one another as separate systems for small consumers.